This page has been translated from Spanish

The Palace of Arts Reina Sofia is part of the City of Arts and Sciences in Valencia.

The Palau de les Arts Reina Sofia (in Valencian) is the opera house in Valencia, and home of the Orchestra of Valencia. Built by architect Santiago Calatrava, sculptor and architect from Valencia and is part of the architectural complex of the City of Arts and Sciences.

It was inaugurated on October 8, 2005. The first opera was performed on October 25, 2006, being chosen for the occasion Fidelio, Beethoven.

The Main Hall: containing about 1500 seats divided between the patio and the 4 levels of suites, is designed primarily as a venue for opera, but converts into a stage for ballet and other performing arts.

Master Room: up to 400 spectators, is a chamber concert hall or conference room.

Audience, with a capacity of 1500 people. It is a spectacular venue for many events. From classical concerts to political rallies. Sadly been suffering from serious problems opening acoustic noise that cause transferred outside the building envelope considerably and is audible during performances.

Chamber theater - Showroom: This is a building for the Applied Arts, which is located right next to the Palau de les Arts Reina Sofia, so it is independent of this. It has a capacity of 400 spectators.

The exterior of the Palace 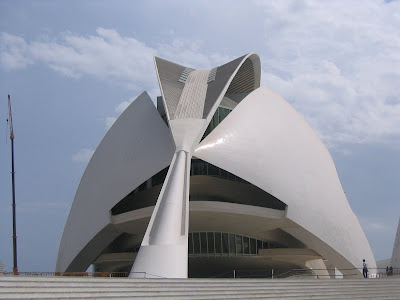 The main building of the Palau de les Arts Reina Sofia poses with two aims: to build an audience and set up multiple an urban landmark that, in turn, is implemented in an urban area as a dynamic and consolidator of the place.

The innovative architecture of this building of 37,000 square meters and a height of 70 meters and houses four different audiences for opera, theater and music, surprises with its multiplicity of environments. There are platforms at different heights with walkways and vegetation, which are accessed by panoramic lifts and stairs located inside metal housings on both sides of the building.

The overall shape of the building is lenticular develop under a jacket or metallic pen, supported by two supports, one at its western end and an intermediate being the eastern part of the cover totally overhangs. The best material is white concrete as part of the major structural supports of the building while the "trencadís" is the second material is of more use than the spectacular "shells" of Palau.

The cover is the most representative of the whole, as well as its structural and geometric rigor, contains a great deal of plastic expressiveness and intention that makes the artistic nature of the activities from inside to outside.

The cover or "pen" is the most structurally spectacular with 230 meters long and more than 70 m. height as the two "shells" which embrace the building exterior are constructed of rolled steel with an approximate weight of 3,000 tons. coated on the outside with tile (trencadís). The maximum dimensions of the building envelope given the curved shape that are 163 m. long and 87 m. wide.